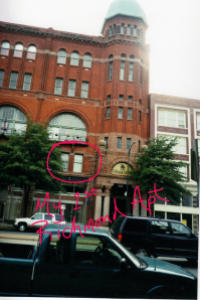 Deciding where the characters in a story live  is key.  The world you create, has to be real to the reader, whether it exists or not.  In fantasy this requires detailed descriptions to help the reader see a world with pink trees and streets paved in black licorice as if it were their own. (Fantasy writers please pardon my terrible example. This is precisely why I don’t write in that genre).  In realistic fiction it involves giving enough detail that readers can see your characters in their space without being drawn out of the story by idiosyncrasies (i.e., “wait a second, K street doesn’t intersect DuPont”).

So when I started Neverending Beginnings I decided to set it in Richmond and I moved my main character, Kate, into the apartment I lived in when I first moved to the city.  It was a fabulous one bedroom in the Renaissance Conference Center .  The apartment was on the second floor, the same floor as a large ballroom that can be rented out.  I still laugh about the December evenings I would run into the fabulously dressed couples headed to their corporate holiday parties while I (wearing sweatpants) was on the way upstairs to do my laundry.  The other awesome thing about this apartment was that the building had previously been owned by the Masons.  The walk-in safe that was part of their offices became my (huge!) closet; the painted, cast iron safe door a prominent feature in my bedroom.

Here’s an excerpt from my novel featuring the building and the safe turned closet:

“Well, this is me.”  I said stopping in front of my building.

“No way. I just helped my friend’s girlfriend move in here this past weekend.”

“Is her name Carolyn, by any chance?”

“We were college roommates, freshman year.  In some weird twist of housing fate, she’s my next door neighbor now.”

“No way.”  I just nodded, and he continued. “This is an amazing old building.  I think it was a Masonic temple at some point, right?”

I nodded again.  “Did you get to see the ballroom on the second floor?”

“You have to catch it when there’s a wedding reception or party that they’re setting up for. I’ve gotten to peek in a few times.  It has this amazing high ceiling and huge windows.”

“I saw the windows from the back of the building the other day.  They are pretty impressive.”

“The closet in my bedroom is actually the old safe from when the Masons were here.  It has the original iron door and everything.”

“You mean, right there on the wall in your bedroom.”

“Wow.  I would love to see that sometime,” he said, still staring at the building. Then he snapped back into reality, and quickly, apologetically, stumbled. “ I mean I’d love to see the how they repurposed the old safe, uh . . . not specifically your bedroom.  I wasn’t trying to be an ass.”

“Definitely.”  I shuffled my feet and started glanced at the ground.

“Okay,” he said as he turned and walked away.

As I watched him walk away I thought strong my urge to kiss him had been, pretty much from the adorably unnecessary apology on.  Much like my disappointment when he explained his move to Seattle, I had no idea where the idea even came from.  But the one thing I did know was that there was no point to any of it if he was leaving.  Why bother, if I already knew the ending?

1 thought on “Making a Space”